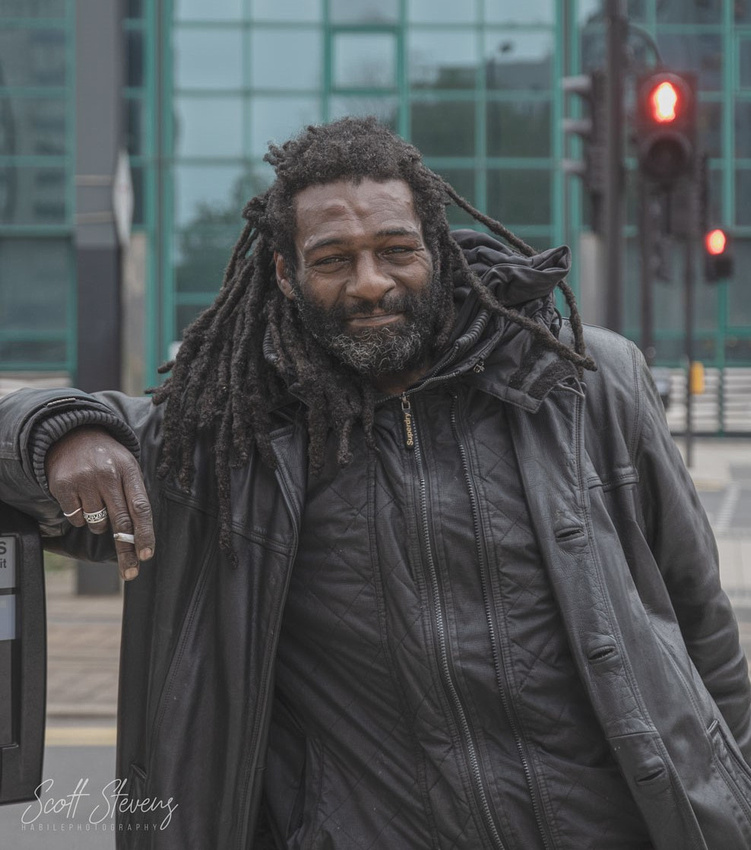 One a chilly and dreary spring weekend I ended up in an urban environment, due to my daughter taking part in a dance festival. With some time on my hands I headed out on to the streets with my camera to see what I could find. Being a bit of a country bumpkin this was quite a change of scenery!

On the Sunday morning I was minding my own business taking pictures of the modern buildings, trams, buses and all things generally towny, when I was aware of this guy approaching me. At first I was a little apprehensive as he looked like he'd spent the night on the streets and probably several before. He was a big guy too. There weren't many other people around so it was definitely me he had clocked and was walking towards. But as he got closer I felt by his whole demeanor he wasn't about to mug me and run off with my camera. I could have been very wrong, of course. I was still a little wary as he came up to me and started talking to me about what I was photographing. but he was very cheerful.

We chatted generally and amiably about nothing in particular for a few minutes when said he'd better get going. But before heading off he asked me if I'd like to take his photo. I was a little caught off guard but said yes, why not?! So he leaned against the crossing lights pole next to where he stood and I took one very quick shot with no regard to the camera settings!! This is the result. One take, no planning - click. There it is.

I knew what was coming next. He said he was a bit down on his luck and heading off to an interview for a job and wondered (here it comes) if I could spare any change so he could go and clean himself up a bit first. He was very polite about it and certainly not threatening or insistent. As it happened I didn't have my wallet but I did have a few quid in change in my pocket which I willingly gave to him and he was most appreciative.

It would also have been very easy to shun him and have no interaction. But as I saw it he was a gentle soul just trying to get through the day, a fellow human being who is just as deserving of my time as anyone else. It's not for me to judge how or why he found himself in his current predicament. I don't know for sure if he had an interview or not, I like to think perhaps he had or something similar. Maybe it would have been nice to have chatted longer and found out a bit more about him. I knew nothing about him, not even his name and I'm pretty sure that face could tell a story or two.

This chance encounter has made me start to keep my eyes open for unusual and unexpected situations to take photos. Partially inspired by this I did did a photoshoot in my home town using some of the modern architecture as a backdrop which I've walked and driven past countless times without giving it much thought. This time it was a bit more planned too! You can see some of the images here... CLICK HERE

It also made think how a little bit of your time can make a difference to someone's day.

Now I know he probably targeted me to try and get a few quid, but so what? I got an interesting photo out of the deal. Win, win, I reckon.